What's your opinion on this?
I've tacked Rosa on the end of this chart c/o www.nextmovie.com 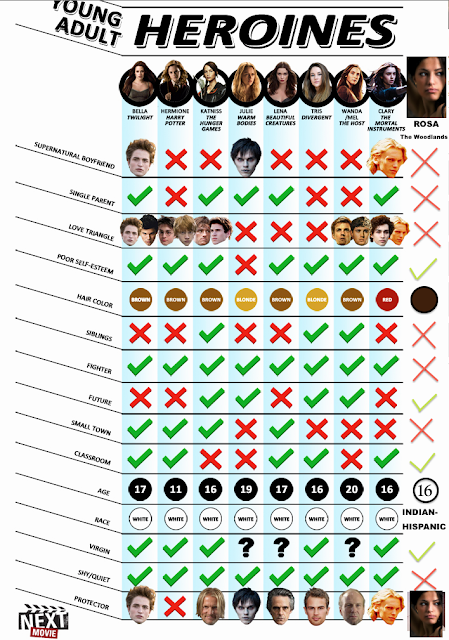 Posted by Lauren Nicolle Taylor at 2:45 PM No comments:

BOOK THREE OF THE WOODLANDS SERIES, THE WOUNDED, HAS A RELEASE DATE!

A day in the life, well a morning at least...

I don’t have an alarm clock. Don’t need one. My day starts at a grossly inappropriate hour. Usually between five and six am. My alarm blares, grunts and coughs and is aged between three and eight years old. It then shakes me because I am returning the grunts with the action of placing a pillow over my head.

“Mummy, Monster Three has no pants on.” I reluctantly drag myself out of bed, part the curtains and sigh at the fact that it’s still dark. My body pulls my brain into the freezing cold and towards the chaos.
Padding down the hall I’m not sure I want to get to the end. There’s light and noise and a three-year-old running around with no clothes on even though it’s only six degrees outside. But I let the warm glow coax me towards the kitchen.

Warm milk. Breakfast. Coffee, lots of coffee. Monster Three requests one breakfast, takes a spoonful and decides she hates yoghurt and muesli, has always hated yoghurt and muesli and how could I have possibly served her such a thing! I laugh and say how would you know what it tastes like when most of it is either on you face or in your hair. I get a death stare for my comment.

Three breakfasts later, maybe she has eaten enough. I don’t know. It’s too late now. The clock has somehow magically worked its way through a whole hour without me noticing. I need to fit Monster Two’s hearing aid, take it out because it’s tangled in her hair, do her hair and then pop it back in again. I end up in hysterics when she asks me if I can hear her ear better now? 'Sure, sure I can', I say.

Now I have to begin the search for three matching pairs of shoes and try to battle my way to the door and into the car. Somehow through this Monster One has disappeared. I search the house. He’s not there. I run outside to see a dinosaur backpack, attached to an eight year old, swaying back and forth high up in the oak tree in the front of our house. I wake the entire neighbourhood yelling at Monster One to get out of the tree while the horn is being bleeped by the other two monsters who are at least in the car.

Finally we’re all in. Seatbelts clicked, Iphone attached. Music on. The cars sloughs to action and my brain switches to book mode. Monster One has asked me the same question five times to which I have answered yes, no, what? Without registering what he asked me. I can’t hear him because I’m in Russia, watching my characters, picturing their faces when they react to situations, concocting dialogue and feeling the snap of branches against their arms as they trek through the low lying trees. I quickly mentally catalogue my ideas and Tell Monster One that No he can’t teach his school friend how to drive my car. Why? Because neither of you can reach the pedals. Probably the wrong answer.

We pull up to school, Monster One and Monster Two file out, their red hair bouncing over the top of their over burdened school bags. I pull out my notebook and frantically scribble down my ideas while Monster Three screams that she’s hungry. (Well she only ate three breakfasts!)

Posted by Lauren Nicolle Taylor at 10:24 PM No comments: